How Does A Solar Light Work Whether you are talking about the small garden stake lights you find at any big box store or a commercially produced solar lighting system, they provide the same functionality. The difference between them is in the design. Here is a basic overview of how does a solar light work.

There are four major components to any light; the solar panel, battery, control electronics and the light fixture. During the day, the solar panel produces power to charge the battery by the photons produced by the sun’s rays collecting and stimulating electrons in the silicon cells. These electrons are knocked off and collected by the wiring of the solar panel and fed to the battery for storage. This happens from the time the sun starts to rise till the sun is set. Full power production doesn’t actually occur till mid-day; however, the panels can produce power in almost any circumstance there is sunlight.

The battery then stores the power produces during the day. The control electronics determine when it is dark out by noticing the reduced power production of the solar panels. This triggers the system to stop feeding the battery and turn on the light fixture. The light fixture will then feed off the battery for its energy to produce the light. The fixture then operates the schedule profile it is set to operate, whether that is dusk to dawn, or in some lights, when the battery is empty. The light will then turn off when the battery becomes too low or the control electronics notice there is power being produced by the solar panel again.

This cycle continues day after day.

The only differences between solar light systems are the operation profile and system components that are used to build the light. Small lights you find at a home improvement store for your garden provide typically one night’s worth of power. They charge small batteries during the day and operate the light fixture only as long as the batteries have charge. This full depth of discharge only provides a short period of time before the batteries would need changing.

Some larger solar lighting systems manufacturers think the above design is okay for commercial practices; however, there is a large system failure since there are differences between locations and applications that need to be considered when designing the system. Large commercially produced lights must take into consideration the project location, the application that it will be used, and other project specifics. A minimum of five nights autonomy, or backup power, should be implemented to lower the maintenance of the system and provide enough backup for little to no failures when there are periods of inclement weather.

Light fixtures specific to the application should also be used. If you have a large area that requires lighting, a small spot light will not produce the required lighting levels. Instead, using light fixtures that produce specific optics and distribution patterns will ensure the light fixtures meet the needs of the project. The lumen output of the fixture, not the wattage, also needs to be taken into consideration. A lighting analysis and calculations can show all this and can be provided by any reputable solar light systems manufacturer.

So that’s basically it. Sun charges the batteries with the help of solar panels during the day and then the light fixture feeds off the battery at night. Want to learn about other ways to use solar for lighting? Check out 3 Types of Solar Street Light Retrofit Systems and learn about the three different ways solar can be used in lighting applications. 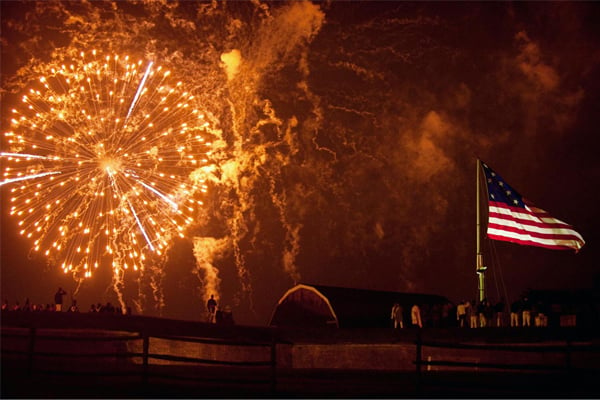