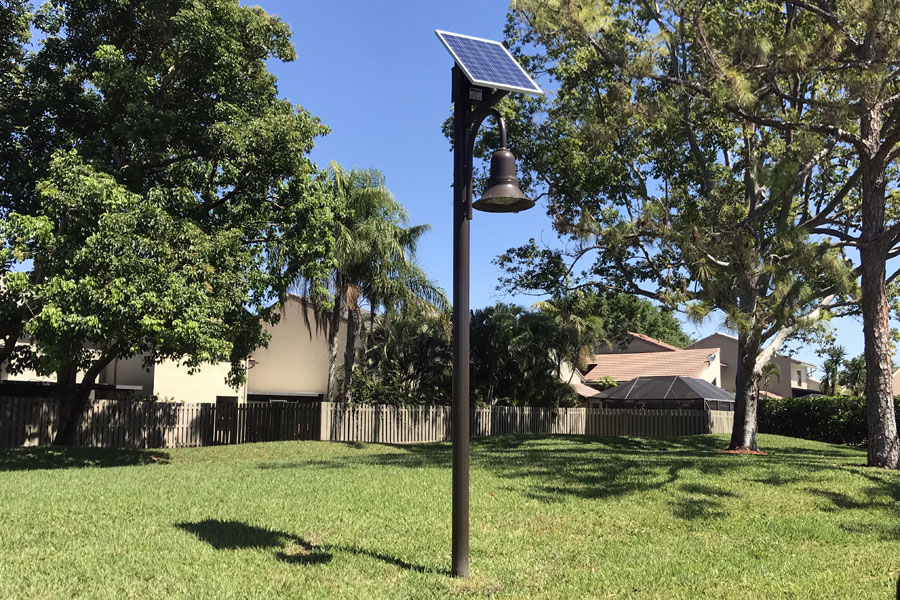 When designing a lighting solution, light trespass needs to be considered, especially when located near a neighborhood. Light pollution is another factor that should be looked at when in the design phase of a lighting project. There are a few ways you can prevent light trespass while not losing illumination on your project specifically.

Directional LED fixtures provide task specific lighting and allows for lighting to be customized to only illuminate necessary areas while ensuring light trespass isn’t going to be a problem. Direction LEDs allow for different distribution patterns. Various patterns, such as a Type 2 distribution which works well for long linear applications such as roadways; whereas, a Type 4 distribution has a larger forward throw to cover a squarer area out in front of the fixture and works for applications such as parking lots and large areas.

Backlight, Uplight and Glare, also known as a BUG rating, is used to calculate the amount of light trespass happens behind the fixture, above the fixture and the amount of glare a fixture has. The lower the number, the less that fixture will have issues with light trespass. Backlight is the light that gets pushed behind the fixture / pole. New technology has allowed for fixtures to have less and less backlight trespass and keeps the light in front of the fixture. Uplight is the light that gets cast into the sky above the fixture. Dark sky requirements are becoming more prevalent in lighting applications and ensuring there is zero Uplight is key to ensure that this requirement is met. Glare causes difficulty for those driving and needs to be considered especially in roadway applications.

Light plans show the foot candles on the ground with any lighting application. The foot candle is the amount of light at surface level from a light mounted shining onto a surface. The lighting plan also shows the area of coverage and can show you where light trespass can become an issue, allowing you to either change optics or move light fixtures around before installation.

Last way to ensure there is no light trespass is to install a light fixture shield. This is a piece of metal that cuts off the light from shining in specific directions and is a last resort in many applications. Shields were more popular before the use of directional LED fixtures since directing the light was a bit more difficult.

All the above is reasons why lighting plans are so important when designing a lighting project. Arbitrarily picking wattages is not a good practice today and more in-depth research needs to be done on any project especially when illuminating areas nearby residential areas.

Solar Lighting Systems are the Best for Parks and Recreation