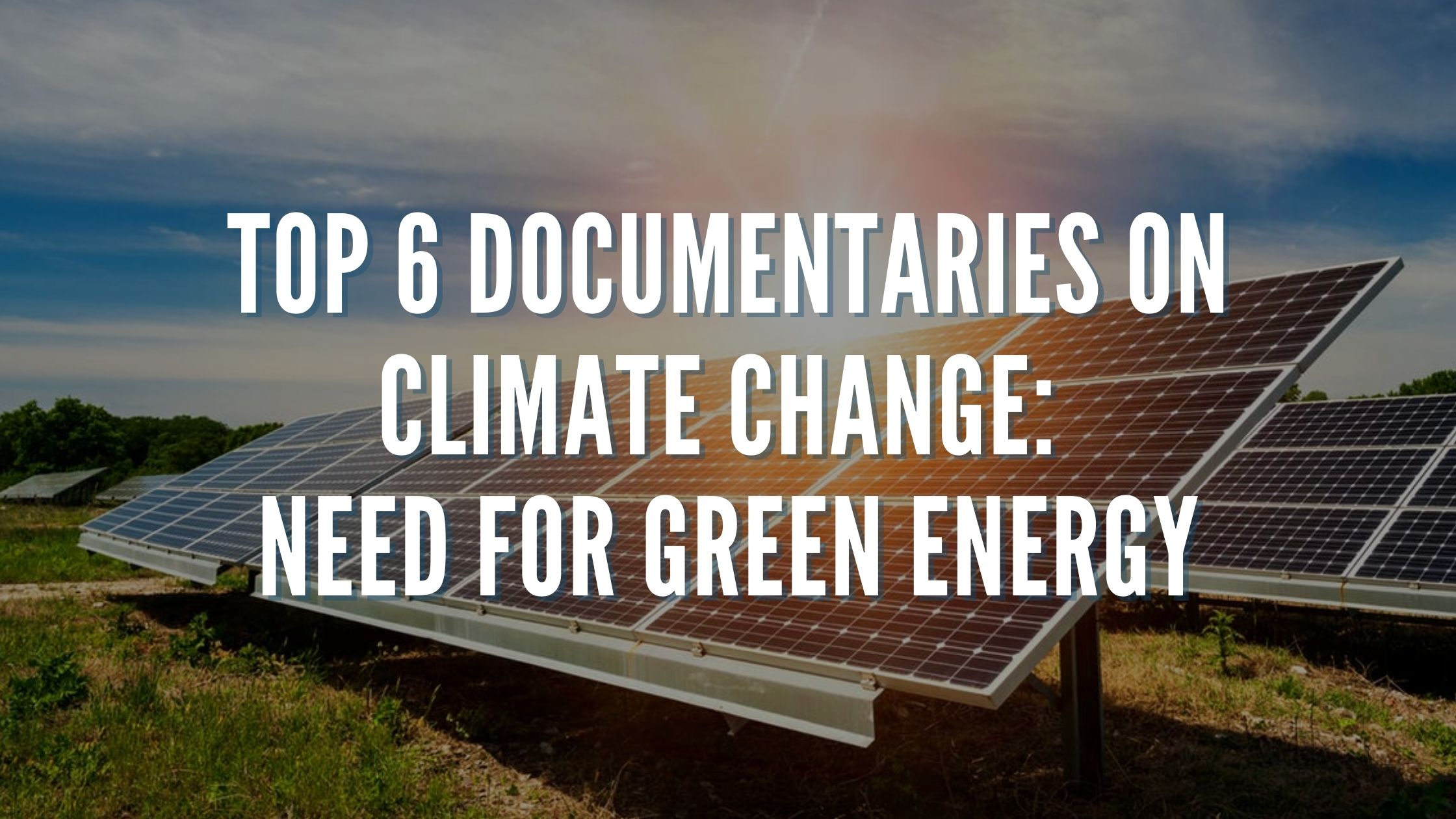 We've all heard about global warming and the need to develop green, renewable energies.  We are in the midst of an oil crisis that destroys our ecosystem and leaves permanent scars on the Earth.  It's easy to hear something like this and feel that these problems are too complex to do anything about, and besides, someone else will figure out the solution.  Right?

Below are six informative, interesting, and inspirational documentaries on climate change and environmental destruction and how it is possible for just one person to make a positive impact.  They explore why we need to let go of our dependence on foreign oil and start embracing renewable energy sources.

What better place to start than with An Inconvenient Truth, Al Gore's documentary surrounding his crusade to spread awareness on the topic of global warming.   Clearly and concisely, he explains how our abuse of natural resources is polluting the Ecosystem and causing irreparable damage.  Mr. Gore puts to bed the rumors that global warming is made-up propaganda and highlights the fact that this is a worldwide issue we need to work together to solve.  As a bonus, there is a beautiful song by Melissa Etheridge entitled “I Need to Wake Up,” written specifically for this documentary.

Thomas L. Friedman is a Pulitzer Prize-winning reporter for the New York Times.  This documentary explains how our dependency on foreign oil is putting our national security at risk and why it's so important to switch to renewable energy sources as soon as possible.  He also talks about the economic, tax, and environmental incentives of various green technologies such as solar power and wind turbines.

This is a short animation film that doesn't beat around the bush.  It operates on the premise that we are in a far worse situation than we have realized and that we may be headed straight for catastrophic destruction.  Yes, it's bleak, but maybe an “in your face” film is exactly what those in denial need.  It isn't completely fatalistic; however, as near the end, the film opens up the possibility that we still have time to prevent global disaster, but the time to act is now.

While the last documentary may have left you feeling a little depressed, this next one is more upbeat.  Josh Tickell spent eleven years traveling worldwide, looking for solutions to reduce our dependence on foreign oil completely.  He sees a strong correlation between the environment and our economy. He believes that the high rates of unemployment and spiraling debt that we are seeing are linked to our quenchless demand for energy.  Mr. Tickell explains how we can create jobs and boost the economy by implementing green energy sources here at home.

No Impact Man: The Documentary (2009, directed by Laura Gabbert and Justin Schein)

Follow the Beaven Family as they attempt to live a whole year whilst leaving no carbon footprint.  This might seem feasible if they lived on an organic farm in California, but they reside in the heart of New York City.  They adapt to the challenge and make changes such as eating locally grown food, not using any electricity or appliances, and riding bikes everywhere they go.  Curious about how this quest to produce zero environmental impact went?  Watch the documentary.

Leonardo DiCaprio is the man behind this documentary.  He interviews over fifty different scientists, politicians, and environmental activists to get their various viewpoints.  They present arguments and a wide array of data on deforestation, extinction, and global warming.  Although there is not just one solution to halt the destruction of our precious environment, the consensus is that we all must work together to get it done.