What is Included in a Remote Solar Power System Package 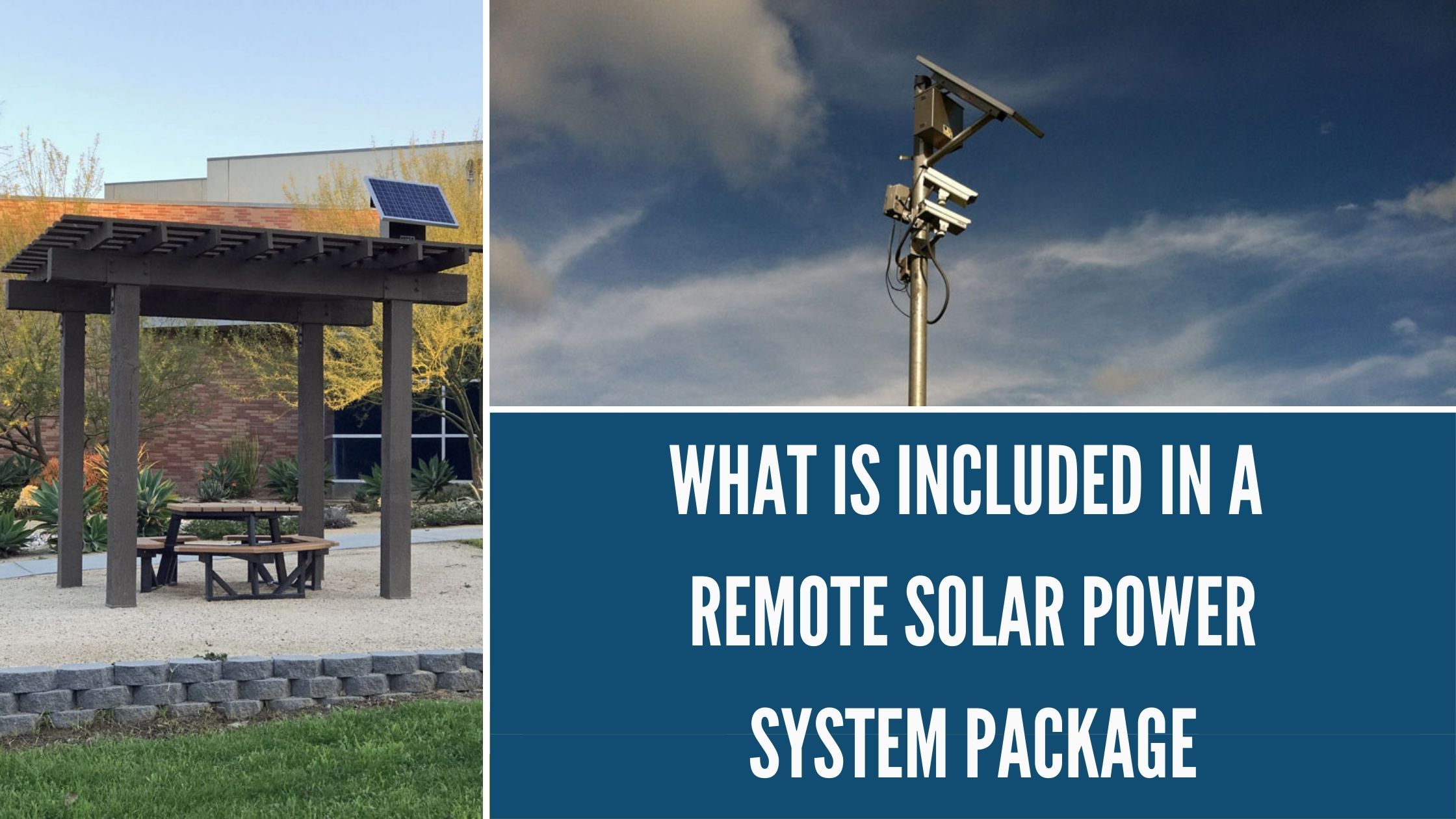 There are five main components that are used with every off-grid solar power solution. These systems provide power to remote locations, typically that do not have access to standard electricity, or it would be difficult and costly to run power to the site.

An off-grid solar system can operate anything from a small light or camera to large-scale applications such as switches, irrigation, monitoring systems, and more.

Each of these systems should be built to the specification and power draw of the device they are operating using and the geographical information to determine available sun. The backup power requirements are then determined by the project installation location weather to ensure plenty of backup power for times of bad weather.

Let’s take a look at these systems in more detail to understand exactly what is included in your solar power system package and make sure you know what you should expect to receive. Various manufacturers may include different types of components, but the standard system should include these five main parts.

You can’t produce solar power without a solar panel. The first and biggest component of a remote solar power system is the solar panels. These are the parts that produce the power for storage or usage during the day.

A solar panel is comprised of silicon cells placed on a grid and protected by glass and framing. This glass is typically impact resistant and tested to handle wind-blown debris and hail. The aluminum frame makes sure the panel holds its shape and is easily mounted to the framework provided for mounting. Flexible and thin-film panels are also used in some installations; however, this is not something that SEPCO offers at this time.

The solar panel produces a finite amount of power when receiving direct sunlight. Understanding how much power the panel produces will make sure you determine if you have enough solar power to operate your equipment. Look at the system specifications to find out exactly what you can expect for power output.

Remember, monocrystalline panels typically have the best performance and efficiency ratings with polycrystalline panels coming in at a close second. Flexible and thin-film panels have much lower efficiency, and more panels will be required to produce the same output.

Now it is time to store the power, and a remote solar power system generally uses some sort of battery assembly to do just that. Understanding the battery assembly can make or break a system.

The battery assembly should hold enough power to handle the load and should never be undersized. Most batteries used for a solar solution should not be completely depleted to zero, especially not daily. A complete depletion means that there is no backup power, meaning that if the sun doesn’t shine as bright the next day, you will be left short on the power that night.

A battery also only holds a number of cycles. For example, if you fully deplete a GEL battery, you will get about 500 cycles, but at 25% (or where a SEPCO solar lighting system is designed to) you would get over 2000 cycles. There is no reduction in capacity during this time.

A LifePO4 battery has around 3800 cycles at full discharge and closer to 13000 cycles at 50% discharge. However, their remaining capacity starts to greatly drop depending on the depth of discharge and can quickly drop to 70% capacity, leaving you with not enough power if the battery isn’t sized properly.

The solar charge controller should also be equipped with an LVD Low Voltage Disconnect so that when the batteries get under a certain threshold, it understands to stop pulling power to ensure that the batteries are not damaged. The system then waits until the batteries have a charge above the LVD level to work again.

Finally, the solar charge controller will help the system regulate the absorption of solar energy into the batteries. Making sure that the batteries are not damaged in this process is key to the lifecycle of the system. Unregulated charging and discharging can damage components and cause systems to break down too early.

Other things that come with your off-grid solar power system include DC to DC converters and inverters. Each of these devices has a role to play in the system.

The DC to DC converter is used where the device requires an exact DC power input. The solar output can vary from 11V-14V DC through the batteries in a 12V system, or 22-28V DC through the batteries. The DC to DC converter takes that variable and makes sure to hold a steady 12 or 24 VDC to the equipment with no variance. This is important for some systems, such as for internal signs where the LED modules do not have constant current technology installed.

Inverters are only used when absolutely necessary, where no DC version is available of the device. This is due to the power losses from the inverter. Inverters take the DC power from the batteries and change it back to AC power for the device. Most components such as cameras, Wi-Fi, etc. all use DC power and have AC power supplies that change the AC power back to DC for the equipment to operate on. Instead, finding a DC version of the same component, or removing the AC power supplies, can greatly improve the efficiency of the solar system.

Making sure all components of your remote solar power system’s package are high grade and can meet the specifications of the load will ensure your system will run reliably for years. Remember, solar panels last 25 or more years, batteries should be replaced every five to seven years and your charge controller varies but should be good for about 15 years or more. Researching companies and getting the specifications and warranty information of each component will help you choose the best system for your application.