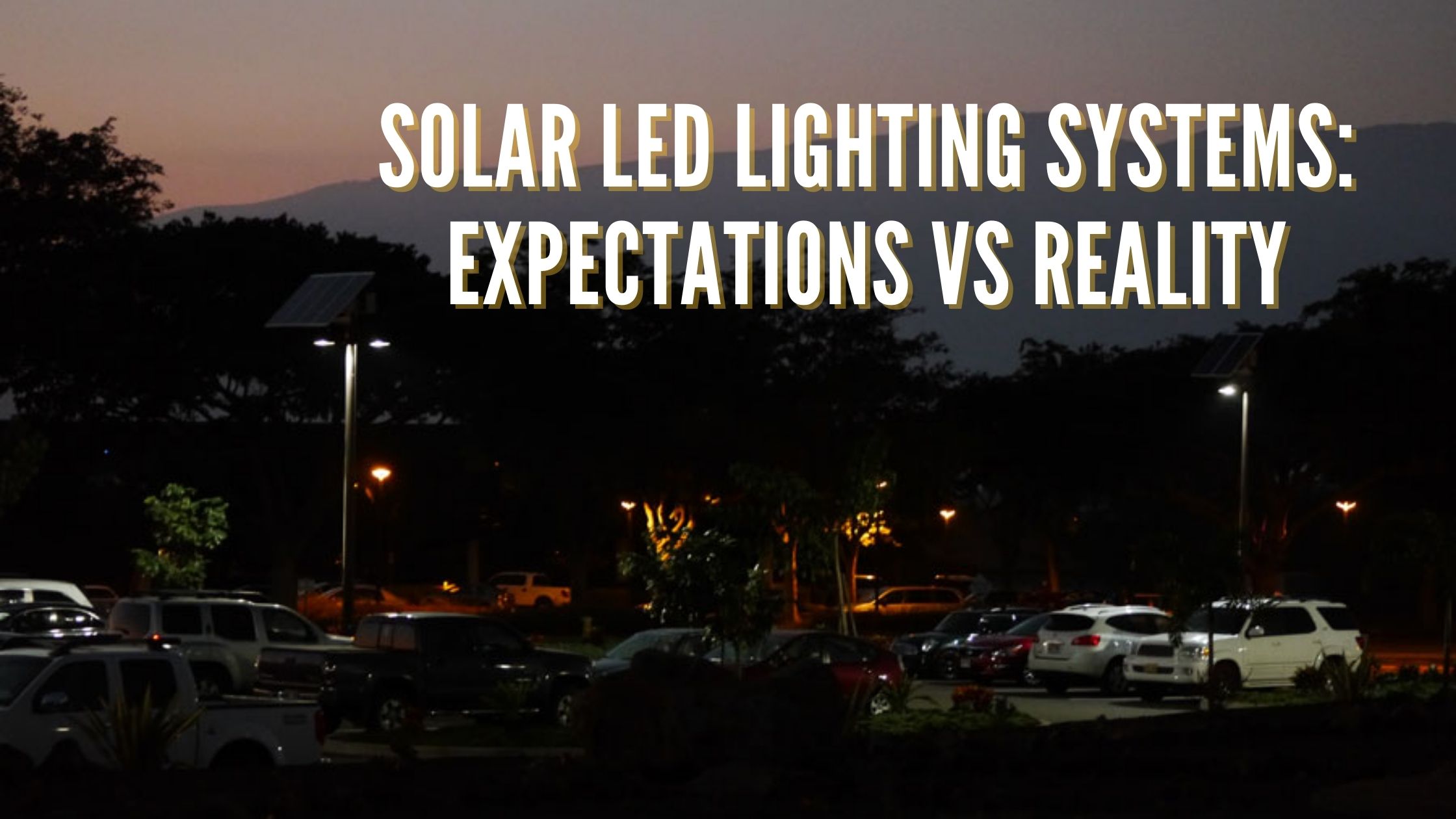 As the solar lighting industry has evolved over the last decade or two, there have been many advances and setbacks that have happened. There are many expectations of where the industry should be and the reality of where we are. Here are some of the various expectations and their realities.

In the beginning, the most efficient light solution, especially when using solar, was compact fluorescent. The lamp produced more light at a much lower wattage, making the kick-off for solar lighting a possibility.

Now, with the introduction and advancements of LEDs, we are in a whole new era of lighting. The light output of an LED fixture, especially ones using directional optics, can rival that of any old-style lighting. However, we still seem to be stuck in this higher wattage means better light theory. The more efficient the lighting, the lower wattage is needed.

We are at the point where LEDs can produce upwards of 125-150 LpW in the 3-5K CRI spectrum. There are many manufacturers out there stating that they produce 200+ LpW, but if you do some research, this is not really the case. Instead, looking at the long-term light output provides a more accurate idea of what to expect over time.

The light output of a solar light has increased exponentially, but we are still watching the LED market evolve. What is 50 Watts in a CFL lamp is not what a 50 Watt LED was 5 years ago, and it will certainly not be what it is currently 5 years from now.

As things evolve, our conception of lighting needs to also evolve. The best way to determine the light output of a solar LED light is to have an engineer do a lighting layout to meet the need of a project. Just picking a wattage because that is what you are used to doing is not helping, but only hurting the solar LED lighting industry.

Solar storage is key to any off-grid solar system, especially in the lighting industry. Storage capacity should always take into consideration the location of installation along with local weather conditions and the amount of sun that is available. 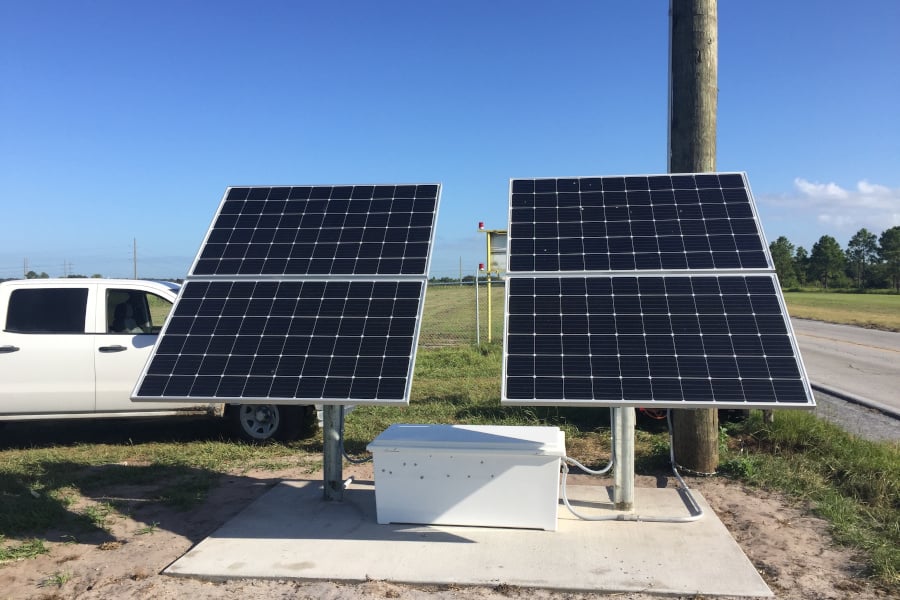 Many companies use “smart controls” that lower the light output when the storage capacity starts to decline, and this is not always apparent in the description of the light system. This is a way to cut corners and provide a smaller system at a lower cost and add liabilities. Standard control options should be used for most applications and all controls should be clearly understood by the end user as well as transparently expressed by the manufacturer.

Various storage options are also available, but we will keep to Lithium and AGM / GEL batteries. AGM and GEL batteries have been field-proven for years and can stand by their warranties. Lithium batteries on the other hand have not been field-proven and only work as stated in optimum conditions. If a Lithium battery gets too hot or too cold, the failure rate is increased exponentially. AGM and GEL batteries operate efficiently in a range of weather conditions and can easily be set up to compensate for installations in cold or HOT climates.

The lifespan is only extended a couple of years and costs have not come down enough to warrant installing Lithium in most applications. Yes, these are much smaller and lighter batteries, but typically are designed to be fully discharged in a day or two, with little to no backup, since that is what a lithium battery is designed for. Instead, providing plenty of back-ups is still required whether you are using lithium or AGM / GEL technologies.

Solar panels started to be mass-produced in the 1960s and had a whopping 14% efficiency. By 1992 it had almost a 16% efficiency rating. Most panels sold today only have a 17-22% efficiency rating; however, since the increased research and usage of solar, panels are starting to be developed that have a higher efficiency rating. Every percentage of an increase is huge and lowers the overall cost of solar with every jump. 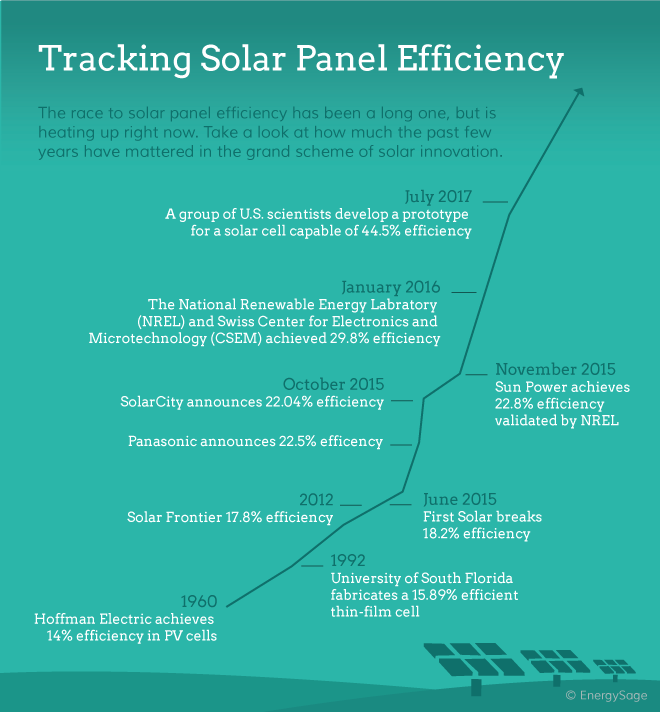 Research is still ongoing and always looking for a way to make panels more efficient to generate more power in the same footprint. As these advances occur, most solar companies move with them to provide more efficient solar lighting systems. This is a lot slower progression and takes years to see only a few percent increase in panel efficiencies.

These increased efficiencies also provide a decreased cost to panels. The more efficient the panel, and the more people who start using solar as a source of power, drive down the prices. These will continue to provide lower-cost systems with more efficient systems.

All in all, solar LED lighting systems are evolving along with industry standards. As new technologies are released, companies doing their due diligence start to test and evolve their systems along with these changes. Maybe in this decade, we will begin to see even more of a shift and evolution in this industry, making panels smaller, lights brighter, and storage with less of a footprint.