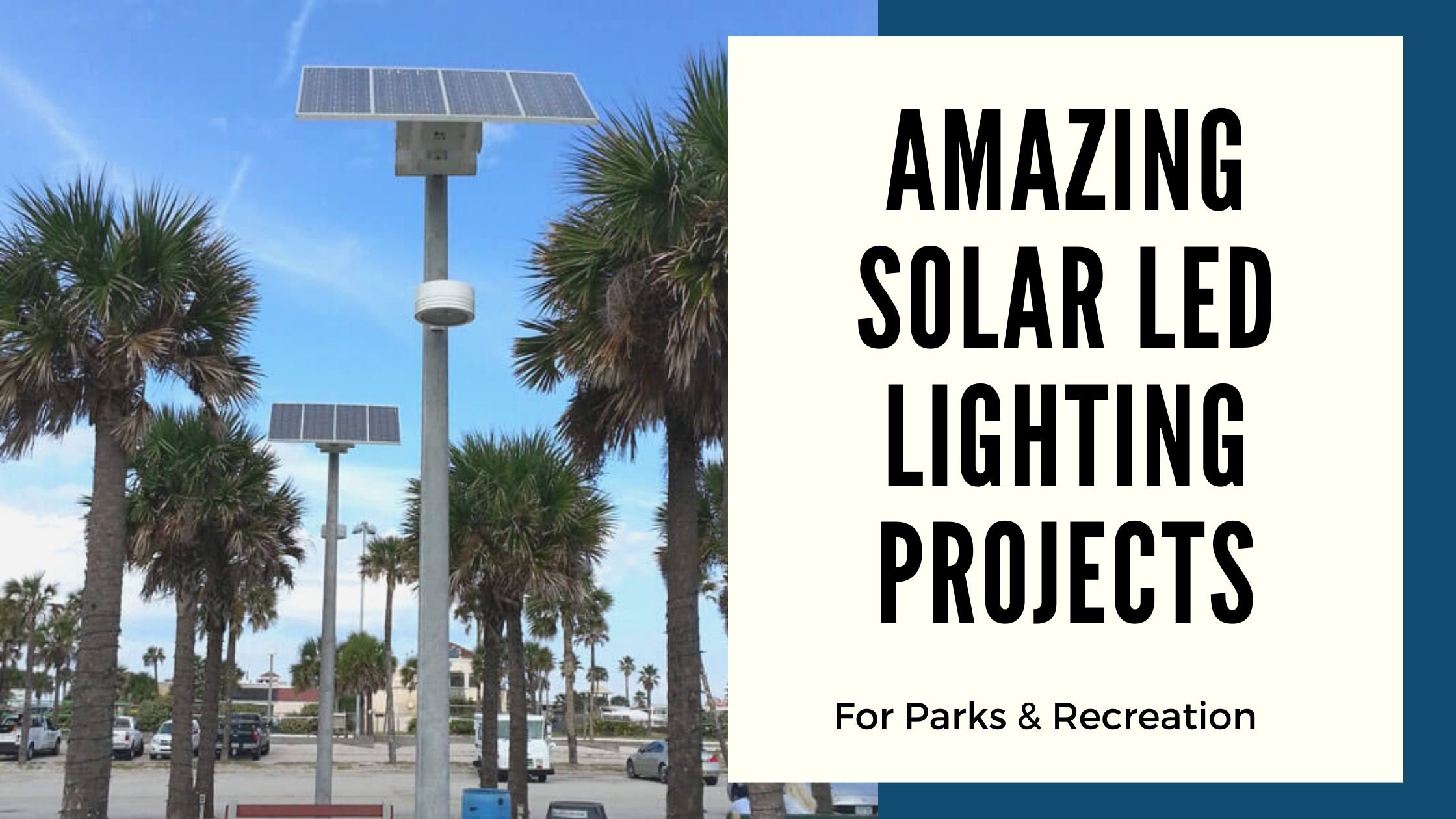 Why Solar Outdoor Sign Lights Are the Perfect Choice

Over the many years of SEPCO's history, we have worked with many municipal parks and recreation facilities to provide solar lighting solutions for various projects. These projects include boat ramps, bike paths, walkways, parking lots, signs, pavilions, and so much more. Solar LED lighting systems can easily adapt from one type of project to another and provide lighting in remote areas without the cost of grid extensions or monthly electric bills. We wanted to showcase some of these projects and see how they have provided additional safety and security for various park projects.

A city municipality in the greater Miami area turned to SEPCO to design a custom solar power walkway lighting system for a small park located in the middle of a residential neighborhood.  The challenge was to create strong enough illumination for the neighborhood residents to enjoy and feel safe walking in the park during the park's evening hours, yet not so much light as to disturb residents with homes adjacent to the park.

SEPCO's solution for the lighting aspect of the project was to illuminate the walkways throughout the park with 20 strategically placed bollards, each equipped with a high-performance 8 watt LED light engine. The next challenge was figuring out how to power the 20 - 8 watt LED bollards exclusively with clean, renewable solar energy.

It is worth noting that there are many solar power LED bollards on the market today that feature self-contained / built-in solar power systems. Unfortunately, SEPCO does not subscribe to this design philosophy. There is one main reason for this. A bollard only has a small surface area. Therefore, there is not enough space to house a solar array large enough to power the LEDs with the amount of wattage required for illumination for a period of time. So instead, we provide a remote solution that provides the power without fail 7 nights a week, 365 nights a year.

SEPCO's solution for the off-grid solar power portion of the project was to design one large, centrally located 340 watt solar power system. This solar power station had the inherent capacity to provide ultra-reliable power needed to illuminate all twenty 8 watt LED bollards for a total of seven hours per night. This time was split to operate from dusk for five hours, then turn off, then back on automatically two hours pre-dawn for the early morning walkers.

The net result is an ultra-reliable, high-performance solar power walkway lighting system that both residents and adjacent homeowners can enjoy and appreciate. 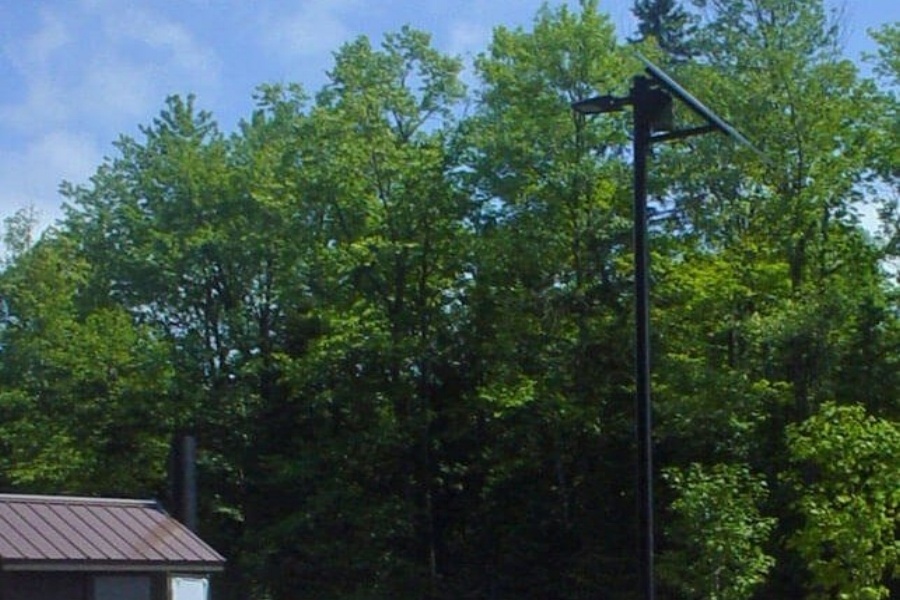 MDNR contacted SEPCO to provide lighting at Maple Bay State Park for their boat launch and parking areas. The solar lights provide safety to boaters and park-goers, but the cost of trenching standard electrical, putting in a meter, and boring under the concrete to get the power where they needed it was cost-prohibitive. The solar lighting solution for their boat ramp and the parking lot was the perfect solution.

MDNR purchased two lights to provide lighting for four hours after dusk and turned back on two hours before dawn. A Viper fixture provides illumination, powered by a 125 Watt solar power assembly. These systems have a minimum backup of up to 5 days of no sun, which is vital in the winter for Michigan. In addition, these systems have an even longer backup built-in to ensure that the cold winter months are covered and consider the more extended periods of inclement weather in northern climates.

The lighting installation was only part of a large project at the Maple Bay State Park boat launch area. They also provided features such as a two-lane launch ramp, two courtesy piers, and vehicle trailer parking areas. They also installed a naturalized stormwater management system and barrier-free accessibility, which significantly enhances the service to the boating public.

This is not the first project completed at a boat ramp in Michigan; however, it is the first to use the bright LED Viper fixture. Our other projects included power flood fixtures using compact fluorescent lamps. With the LEDs' life expectancy and lumen output is superior, they will be installed more frequently. 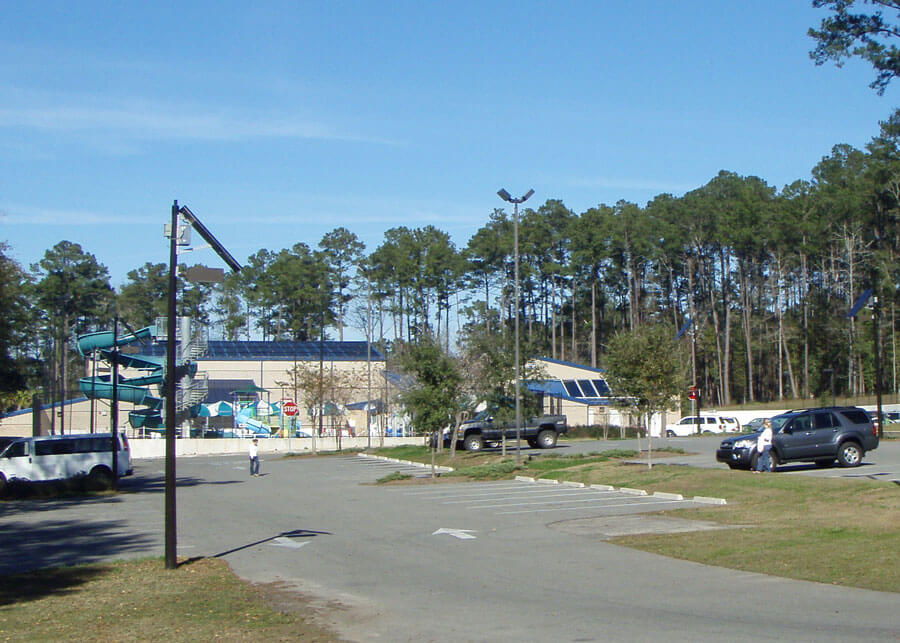 In the summer of 2007, the City of Tallahassee, FL, contacted SEPCO regarding a lighting project for Jack McLean Park. According to the city's website: "The 52-acre Jack L. McLean, Jr. Park provides active and passive recreation facilities, including five covered picnic shelters with grills, two comfort stations, a playground, four basketball courts, two tennis courts, a 24-station fitness trail, two bike trails, and two sand volleyball courts. The park is named for former City Commissioner Jack L. McLean, Jr., who was the driving force behind the acquisition and development of the former Southside Park." The park also includes a 20,386 square foot recreation center and aquatics complex.

SEPCO was tasked with solving the shading issue. Normally the solar panels are faced directly south at an angle of 45° to the ground. This type of installation allows the panels to be exposed to the most sunlight in the wintertime when the days are shortest, and the sun travels across the sky on a more southern plane. By using this method of mounting for the parking lot, the solar on the east side of the parking lot would be shaded for most of the first half of the day. The solar on the west side would be shaded for most of the second half of the day.

SEPCO included time clocks with the systems. This would allow the lights to run only during peak hours to conserve energy. The clocks also would enable the runtime to be reduced in case the shading turned out to have more of an effect than anticipated.

In the end, the city used the SEPCO equipment to set specifications for a bid. As a result, the city had the lights installed and now has solar lighting complementing its beautiful family-friendly park. 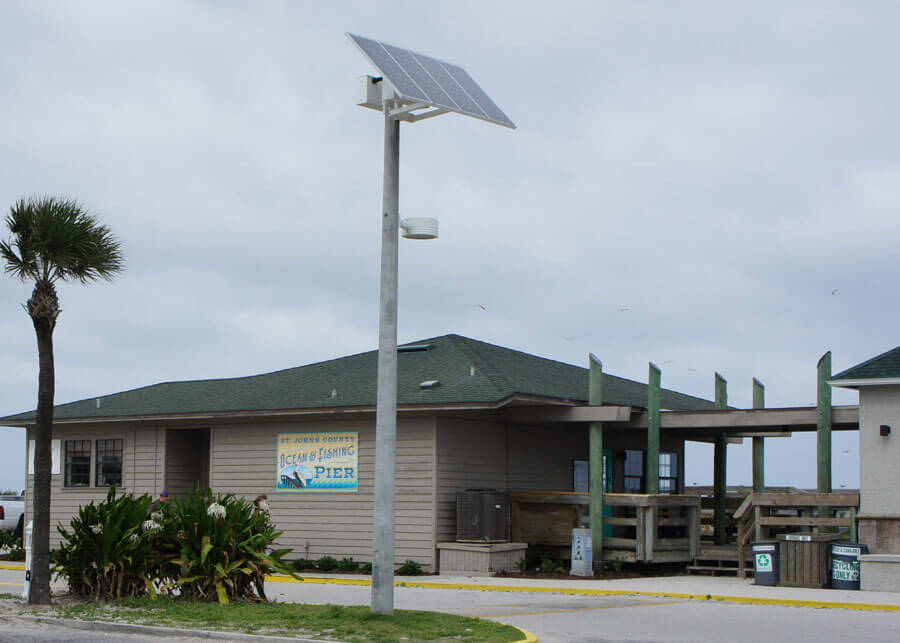 St. Johns County was looking to complete improvements into the parking areas at the beach parking and wanted to integrate a renewable aspect. The project was designed to integrate standard AC utility electrical lights while also integrating stand-alone solar lighting systems.

The lighting design and engineering firm working on this project needed to match the entire light poles and fixtures and be aesthetically pleasing and high-performing. We were able to assist with this request by using our partnership with Kim Lighting, which allowed us to work together to offer our solar power systems to integrate the decorative Curvilinear high Performance LED light fixture into both the solar lighting and utility power design.

The production of the fixture in both AC input and DC input takes a lot of background engineering. What is different about AC utility power lights and DC solar stand-alone lights is that the solar system is only as reliable as its design. If the fixture draws 1 watt more, it could drain the battery, make the system unreliable, and require early battery replacement. This 1 watt will operate for about 14 hours in the winter, drawing 14 more watts out of the battery and draining the battery closer to the total depth of discharge.

The solar battery has a life expectancy which is based on the cycling capacity. The more the battery cycles through to its DOD - depth of discharge, the sooner the battery will need to be replaced. With LED lights and electronics lasting much longer, the batteries are the weakest components in the system and need to be adequately designed to have a long life cycle.

The project was a success and looks beautiful. Direct burial round white concrete poles with solar on the top and the curvilinear fixtures below match in with the pier and parking areas and meet the needs that St. Johns County was hoping for.

As you can see with the above projects, solar has easily adapted to the needs of various projects. Whether it is a shaded area where solar needs to adapt to overcome the shortage of solar, to match fixtures that are already on a site, SEPCO has been able to fill in the gaps. Of course, we can showcase many other projects, but we wanted to show you four very different setups and how solar could easily overcome the obstacles.

Why Solar Outdoor Sign Lights Are the Perfect Choice